Use this easy tutorial to create monster cupcakes with swirl frosting and googly eyes for Halloween or for a birthday treat at a party.

Hey there! Today, I’m going to show you how to make really easy Monster Cupcakes with swirl frosting and googly candy eyes. This tasty little dessert is perfect for Halloween or for a treat at a birthday party. 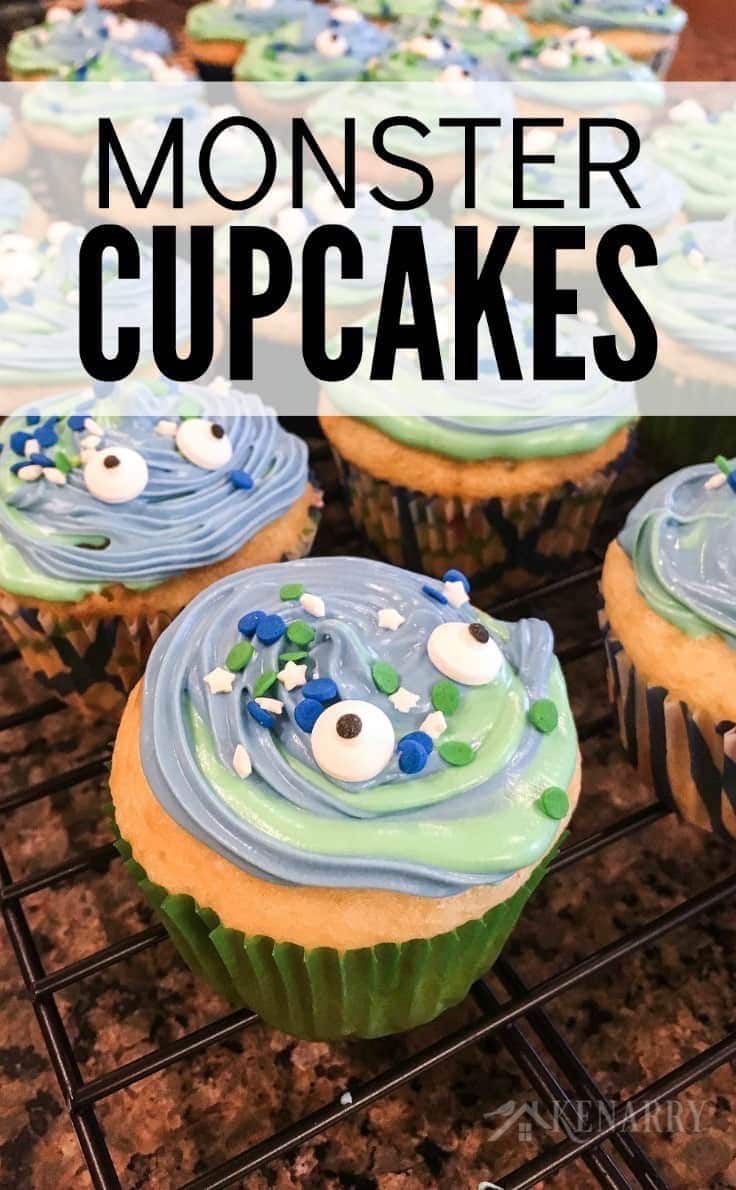 When our oldest son turned seven a few months ago, he was very specific about what he wanted to bring for his birthday treats at school. In the past, he’s brought Puzzle Party Favors, bags with Star Wars goodies and a Muppet Mix birthday treat. For this 7th birthday he was clear – no themed birthday treat with famous characters. Instead he wanted something edible to eat in his classroom. He thought frosted cupcakes would be a big hit with his classmates.

I took him down the baking aisle at our local grocery store so he could pick the cake and frosting flavors and sprinkles he wanted. Then we transformed his vision into fun and festive Monster Cupcakes that were a big hit with his classmates. While we used these Monster Cupcakes to celebrate his birthday at school, they would also be super cute for a Halloween party!

How to Make Easy Monster Cupcakes

Prepare and bake cupcakes following the directions on the cake mix box or use your favorite homemade recipe. We used a regular yellow cake mix for the Monster Cupcakes. The cupcake liners we chose to fill the cupcake pan included several different green and blue patterns. We liked how the variety gave the Monster Cupcakes a very festive look for the birthday treat.

First I watched this fantastic tutorial for How to Pipe Two-Tone Swirled Frosting from Kelly Senyei at JustaTaste.com

I didn’t have any of the extra large piping bags that Kelly recommended on hand. Instead I put my large decorating tip into a gallon sized resealable ziploc bag. This worked okay, but the piping bags Kelly uses would probably be easier and more efficient. For our Monster Cupcakes, I also used store bought white frosting. First I mixed green food coloring with one can of white frosting. Then I mixed blue food coloring with the other can of frosting until the birthday boy felt the colors were dark enough for his school treat.

I put the two frosting colors into separate 12″ piping bags. Then I put both bags inside of the gallon sized resealable bag similar to how Kelly shows in her video and swirled the frosting on to the cupcakes.

Because I used whipped frosting, I found there was less of a crisp distinction between the two colors than what Kelly shows in her video. The frosting on our Monster Cupcakes had more of a blended effect. But my seven year old was thrilled, so that’s the main thing, right?

Add colorful sprinkles to the top of each Monster Cupcake. Then last, but not least add candy eye balls to complete the ghoulish look! 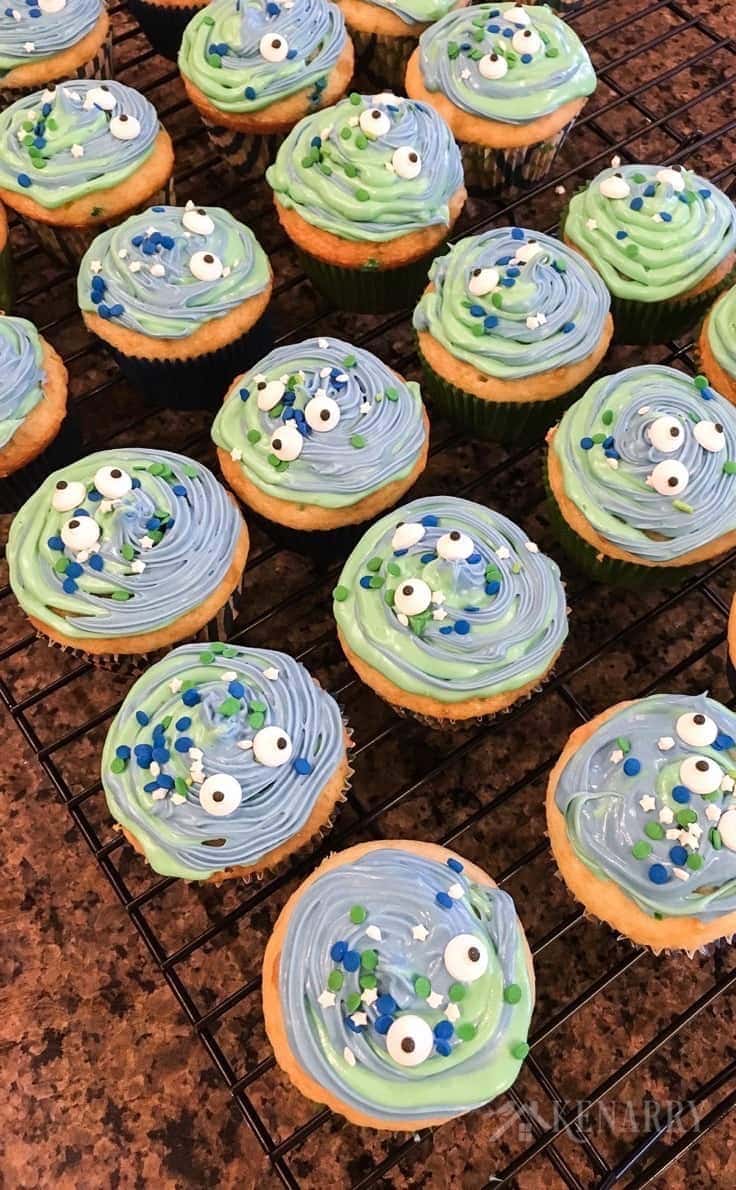 4. Take and Enjoy the Monster Cupcakes.

Put all of the Monster Cupcakes into a cupcake carrier with a lid and a handle. This will protect them and make them easy to transport to school or to a friend’s house for a birthday or Halloween party. If you’re having the party at home, the lid will just keep them dust free and fresh until party time!

While you’re here, be sure to check out other festive treat ideas –

If you enjoyed these monster cupcakes, please share this with your friends or pin it for later: