Check out our boys bedroom plans including removing the Curious George decal and painting the walls and an outer space theme mural.

Today we’re kicking off our boys bedroom plans by sharing before photos and ideas for changing the room from a Curious George focus to an outer space theme. 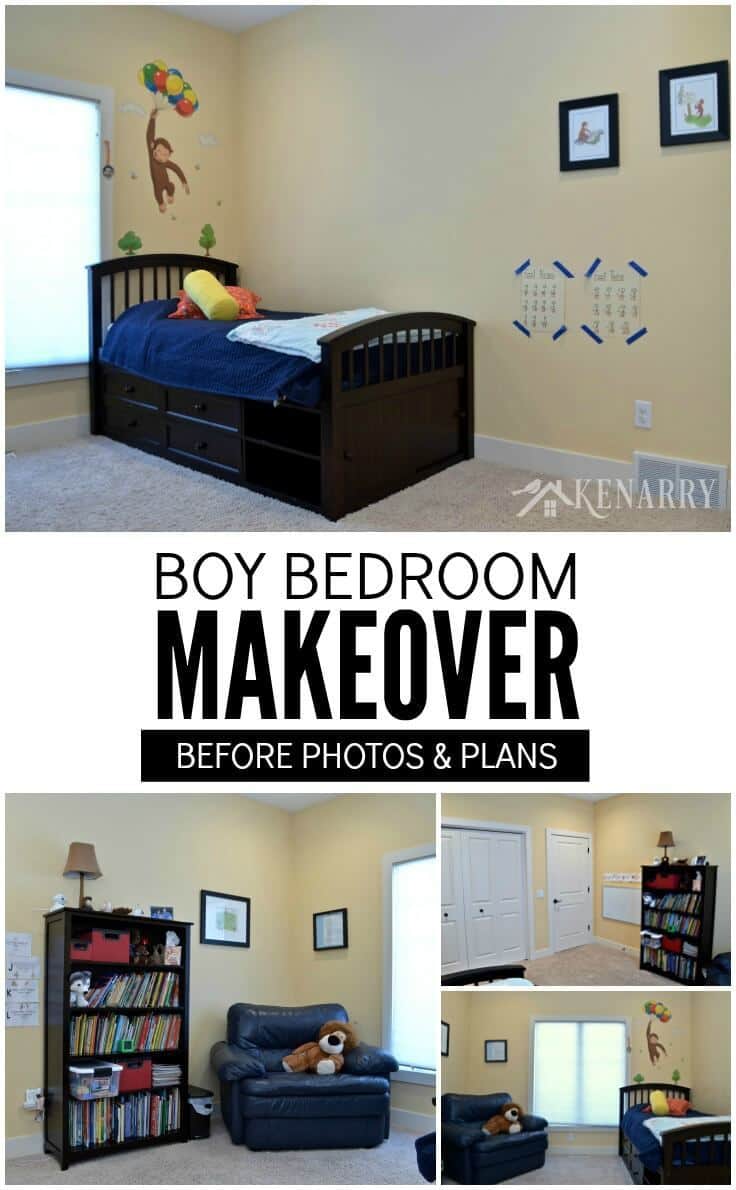 We have two children ages 5 1/2 and 3 years old, both boys. When our oldest was two and a half years old, we moved him out of the nursery into his first big boy room in order to make way for the arrival of his younger brother. At the time the bedroom was already a pale yellow color so we didn’t bother painting it. C1 was super into Curious George that year. He even had a Curious George cake for his second birthday. So of course, the obvious theme of choice when it came time to decorate his big boy bedroom was Curious George. 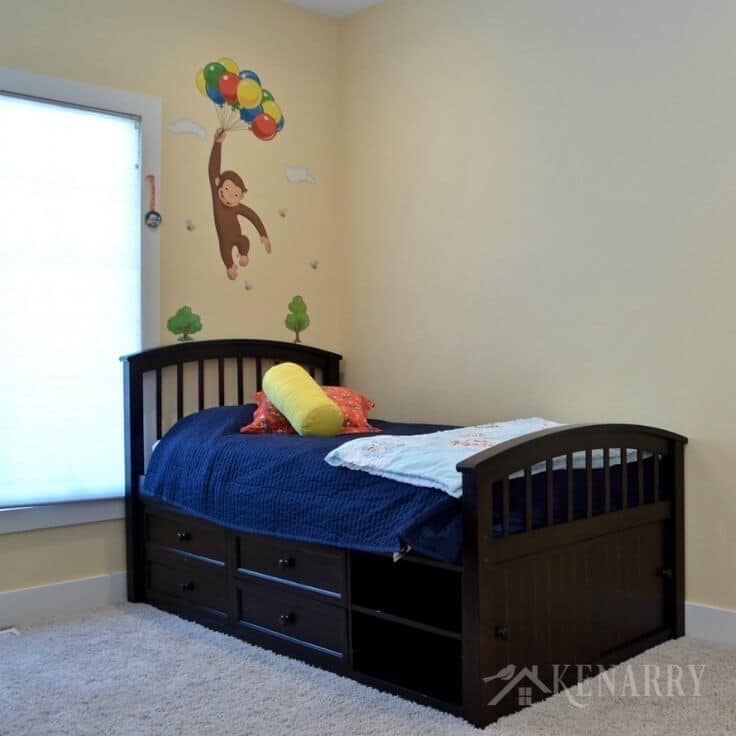 Fast forward a few years and now our two boys are begging us to share a room like they do up north at our cottage. After a lot of consideration, my husband Kent and I agreed to give it a try. We’ll admit we’re a little nervous about the boys waking each other up in the morning or keeping each other from falling asleep at night. We do have a fantastic video monitor so we can check-in and keep tabs on whether they’re in or out of their beds without having to open the door. That ought to help. We figure worse case though we can always separate them back into their own rooms if it doesn’t work out.

Before we get to work we wanted to share before photos of the Curious George bedroom so you can see our starting point. We also wanted to tell you about our boys bedroom plans, including a dramatic change in paint color, a few new furniture pieces and an exciting new theme that’s out of this world!

One Room Challenge: Week One

Over the next several weeks, we’ll be giving the big boy bedroom a significant makeover, moving the younger son into it and then turning the nursery into a playroom on the main floor. We’ll be sharing our progress as part of the One Room Challenge hosted by Calling It Home. The One Room Challenge is a six week adventure where bloggers around the globe tackle a makeover of one room in their house. Each week, we’ll share a different phase of the project as the room comes together. A few hundred bloggers are participating in this round of the One Room Challenge. You can check out all the One Room Challenge Week One posts to see where everyone is starting in their journeys or follow along on social media at #oneroomchallenge and get inspired to tackle a room of your own. 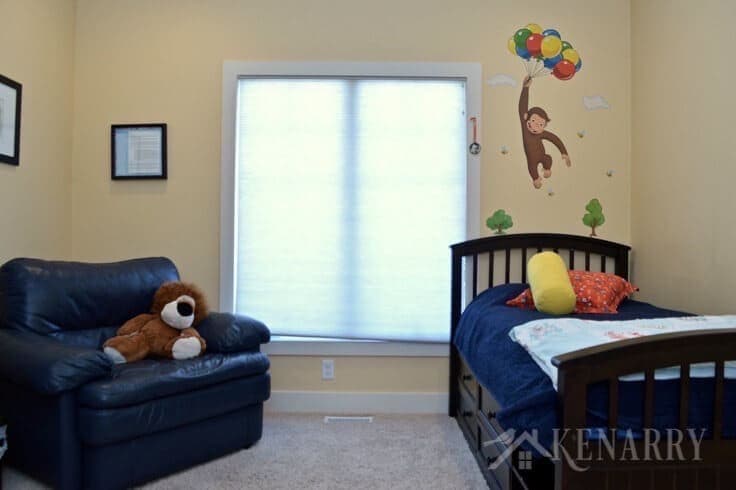 Disclosure: This blog post contains affiliate links for products or services we think you’ll like. This means if you make a purchase from one of these links, we’ll make a small commission at no additional cost to you so we can keep the great ideas for the home coming your way. All opinions expressed are our own, derived from our personal experience.

While both of the boys still giggle in hysterics over the antics of that precocious monkey, it was time for a change in the room’s overall theme. For this next phase in their lives, I wanted the room to be based more on a general concept and not on a specific character. I love to be creative and artistic so I also wanted to go with something that I could paint as a mural on the boys bedroom walls, sort of like I did in our Castle Playroom downstairs. Before I know it, they’ll be too old to want their momma to paint fun things on their walls anymore so I want to seize the opportunity while they still enjoy it.

Step one: Choose a new theme. The boys and I brainstormed a few theme ideas including under the sea or an ocean theme with sea creatures. We thought about a jungle theme with wild animals and vines. Of course the little brother chimed in every now and again with theme ideas that mimicked whatever his big brother just said.

We also debated about other character themes like Angry Birds, Wild Kratts or Star Wars. C1, the five and a half year old, just watched the first six Star Wars movies with Kent on Sunday afternoons this winter so he was strongly rooting for a Star Wars themed boys bedroom. I reminded him that he’ll be sharing the boys bedroom with his three year old brother and that some of those characters might be a little too frightening for C2. Eventually we compromised and landed on a theme we’re all excited about – OUTER SPACE!

Step two: Remove the current decor. We’ll remove the Curious George wall decal that’s above C1’s bed. Thankfully he never figured out that you can easily just peel the whole thing off the wall. I’m not sure if we’ll move it into the nursery when it becomes a playroom or just get rid of it. 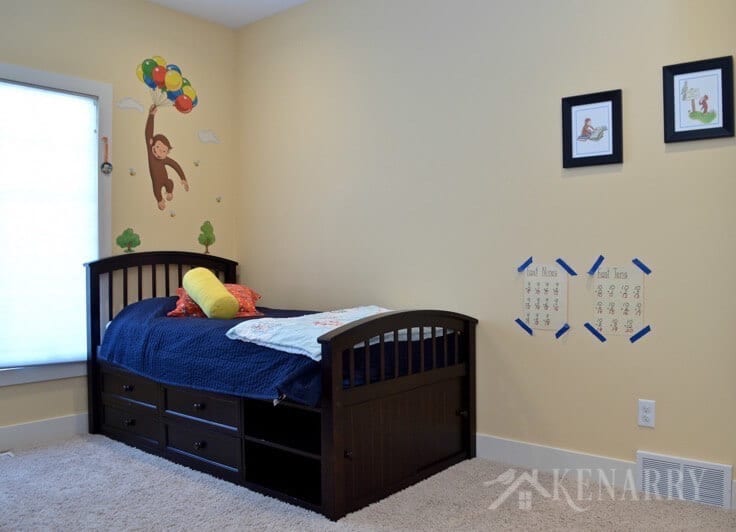 We’ll move the oversized blue leather chair out of this room and into the nursery across the hall along with the large shelving unit to create a reading corner when the nursery becomes a playroom for the boys. We’ll then get a new twin-sized bed where C2 will sleep. When I talked the boys out of a Star Wars themed room, part of the compromise was that we would get Star Wars sheets for their beds. This bedroom always stays super cold most of the year, so I was thrilled when I found Star Wars flannel sheets on sale at Kohl’s. 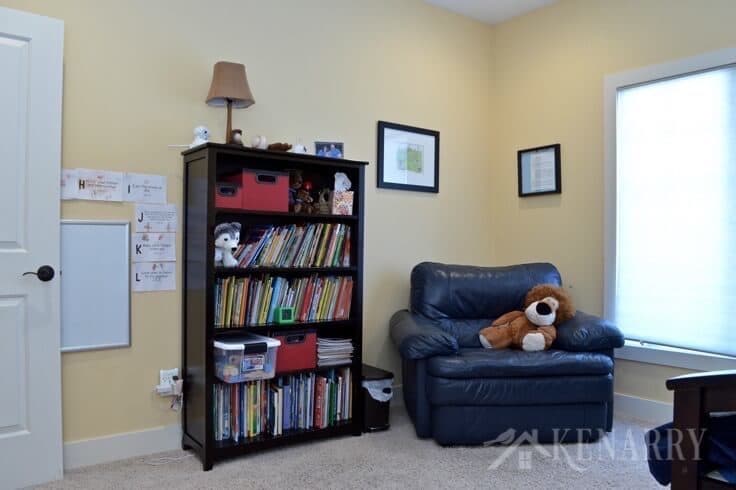 The large marker board behind the bedroom door is also coming down and may get moved into the nursery/playroom. 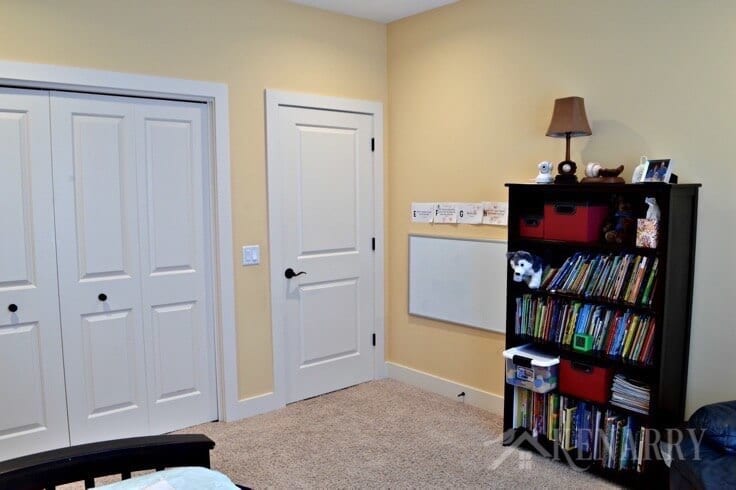 We used to use it to track big events and things that were coming up or to tack up C1’s calendar from school. Lately we’ve just been taping the Bible verses that he’s been memorizing directly on the wall. We ended up taking the dry erase markers away after a little fiasco one day during rest time. Thankfully it’s not as hard as you’d think to get dry erase marker off the walls! 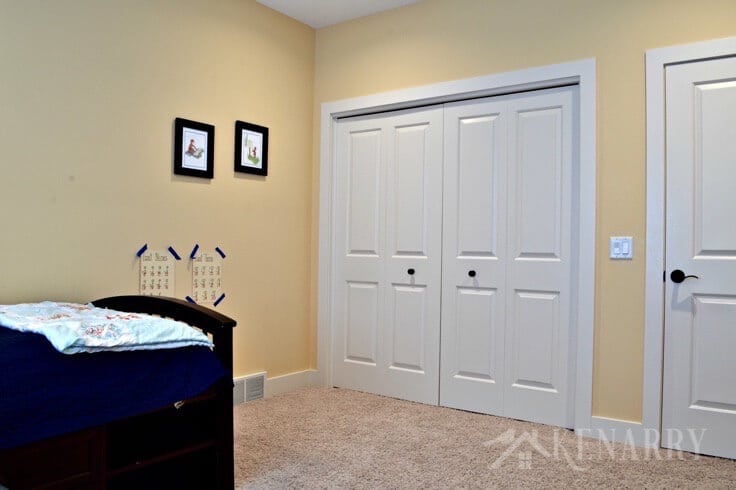