2. Determine where to put the rocket and planets. I knew I wanted the large rocket above my five year old’s bed so that it would be a focal point as you walked in the room. I then walked around the room and placed Post-It Notes on the walls where I thought the eight planets could go. I actually started by marking a few of the locations with pencil, but then realized I couldn’t see the pencil when I stood back. Using Post-It Notes to mark the locations of the planets helped me to see how many I had on each wall and whether they were spaced far enough apart before I actually started painting the outer space mural.

3. Sketch the outer space mural with pencil. For the rocket, I just sketched the outline of it on the wall with pencil. I didn’t worry about the details of the rocket at this point. Next I gathered plates and bowls of various sizes from my kitchen to use as circle templates for the planets. Once I knew where I wanted each of the planets to appear on the walls, I just held different sized plates or bowls up to the wall and traced around them with pencil.

4. Apply primer to the outer space mural. As great as DecoArt Americana Multi-Surface and Dazzling Metallic Paints are, I knew it would be a challenge to paint over top of the dark outer space gray walls. I consulted with my brother who’s a set decorator for a national talk show. He suggested I paint all of the spots for the planets and the rocket with primer before I use the DecoArt Americana Multi-Surface and Dazzling Metallic Paints. 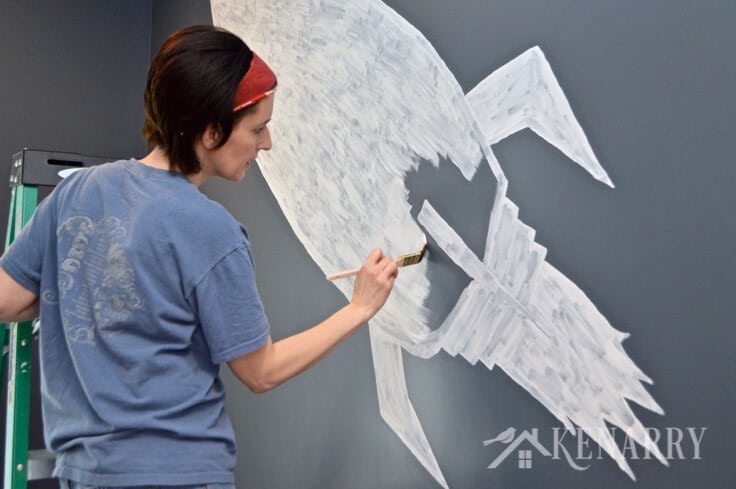 I’m so glad I took his advice. The primer ends up being a neutral base coat so that later the colors of the DecoArt Americana Multi-Surface and Dazzling Metallic Paints can really show up well. 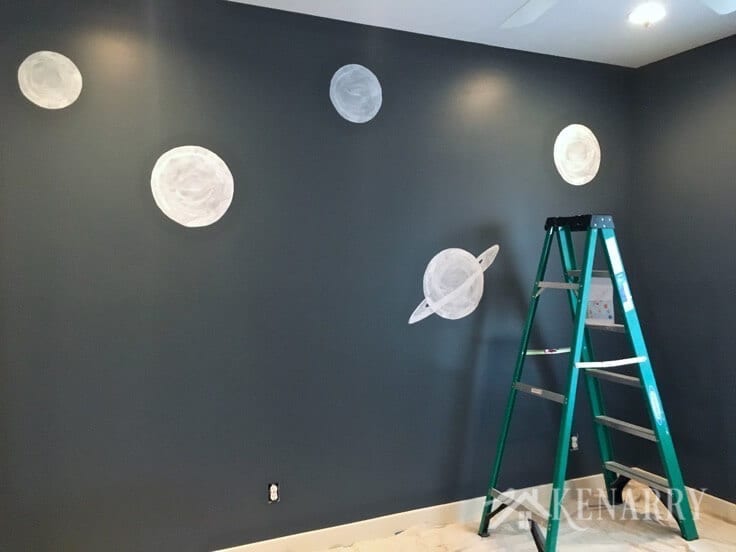 Plus it was really fun to see the planets and rocket start to appear in the “night sky” of the outer space mural. (Our dog, Scruffy, thought so too as he supervised the entire project from the door way.) 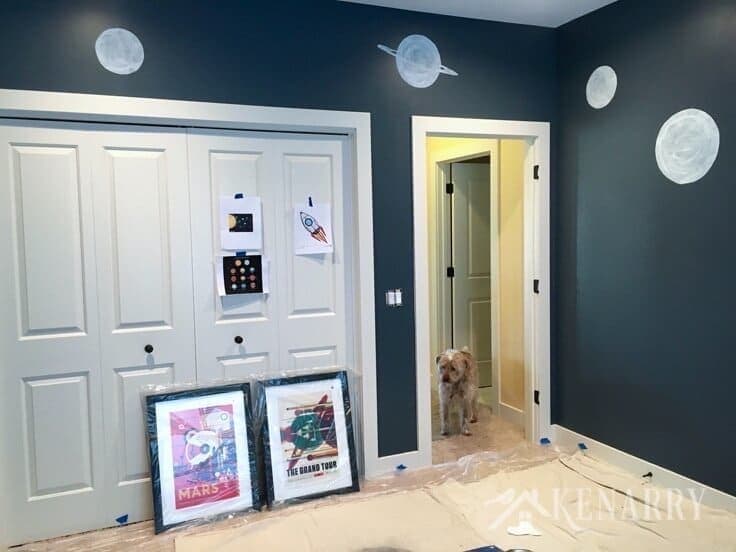 5. Paint the planets. To paint each of the planets, I went through three basic steps. First, I primed them as I mentioned previously. Second, I painted each planet with a different colored foundation using solid DecoArt Americana Multi-Surface Satin Acrylic Paints. I just used the three primary colors of True Blue, Lipstick (red) and Canary (yellow), along with Black Tie and Cotton Ball (white). I mixed combinations of those paints together in small plastic containers to get the colors and shades I wanted. 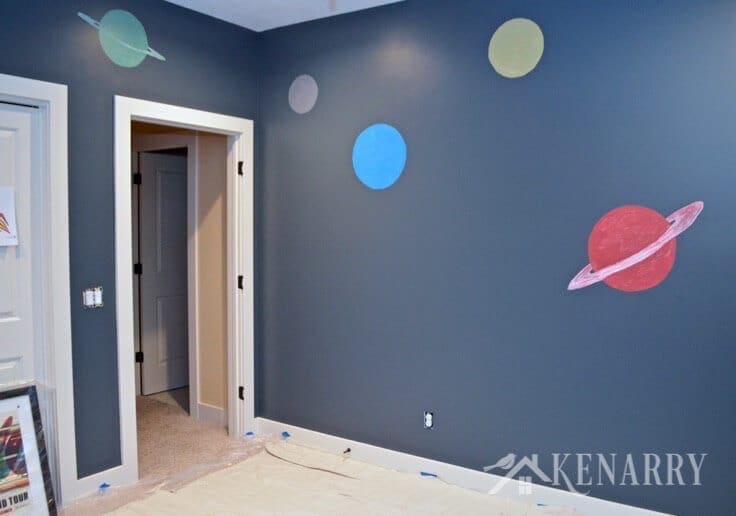 Once that was dry, I poured small amounts of DecoArt Dazzling Metallic Paints and Americana Multi-Surface Satin Paints into a plastic paint palette and focused on similar colored planets at the same time. In our outer space mural, there are two red planets, three brown/orange/gold planets, a blue planet, a green one and a purple planet. I rinsed off the plastic paint palette and started fresh each time I changed a color scheme to work on a new set of planets. 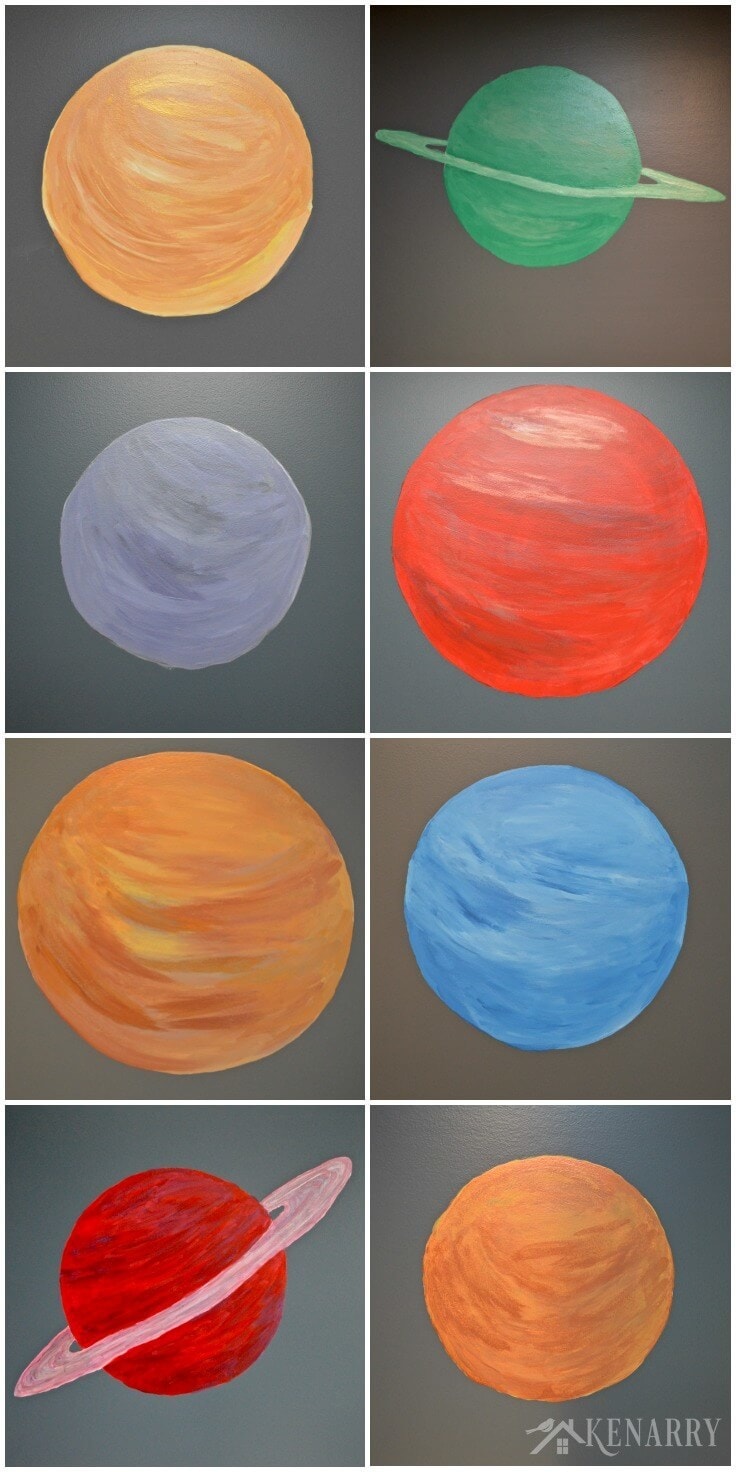 For the red planets I primarily used these colors:

For the brown/orange/golden planets I used these colors:

For the purple planet I used these colors:

For the blue planet I used these colors:

For the green planet I used these colors:

I especially focused on using the DecoArt Dazzling Metallic Paints in this stage of painting as I wanted the planets to reflect the light in the room so they really shine in the “night sky”. Unfortunately, it’s hard to capture that in photos, but trust me when I say this one above the closet, for example, shines bright like a penny when the lights are on in the room: 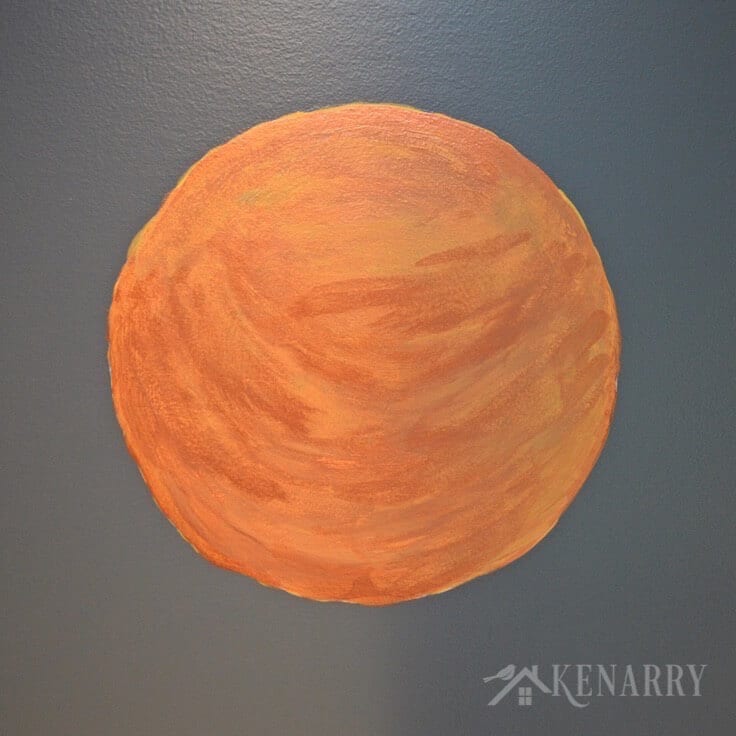 You can see the entire process illustrated in the photo below using Saturn as an example. To get the rings of Saturn to have a lighter, wispier appearance, I actually watered down the DecoArt paints slightly so they’d be more transparent. As the final step for both Saturn and Uranus, the two planets with rings in our outer space mural, I actually watered down Metallic Silver paint and gave a quick silver wash over the rings to make them more reflective.

6. Paint the rocket. Once the rocket was painted with primer, I used a pencil to sketch the rest of the details including the nose cap, the jets and the thruster. 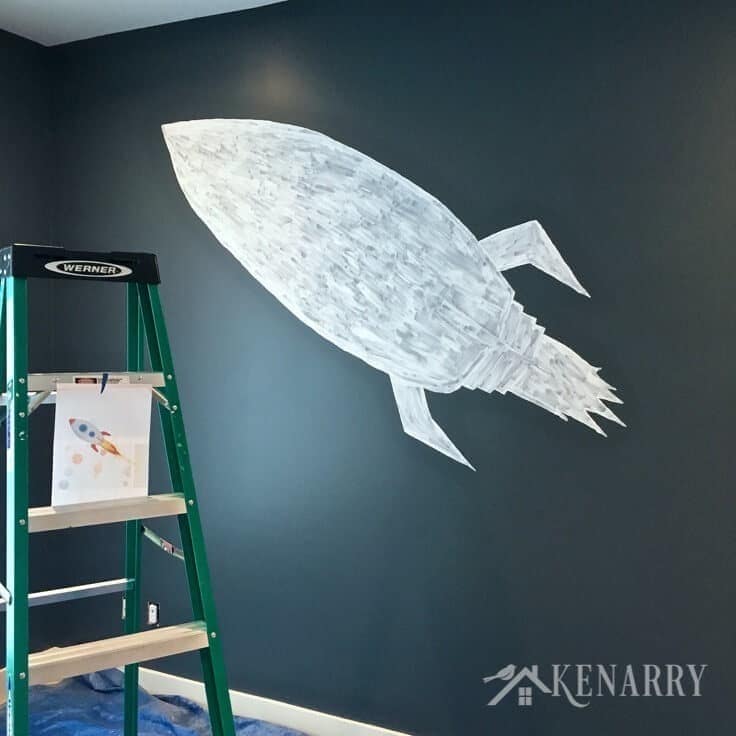 To make sure the windows were round, I actually used two bowls that nest together. I traced the larger bowl first with pencil. Then I centered the smaller bowl within the pencil outline and traced it. Once that was done, I began painting the rocket starting with the white part and working my way out from there as each part dried. 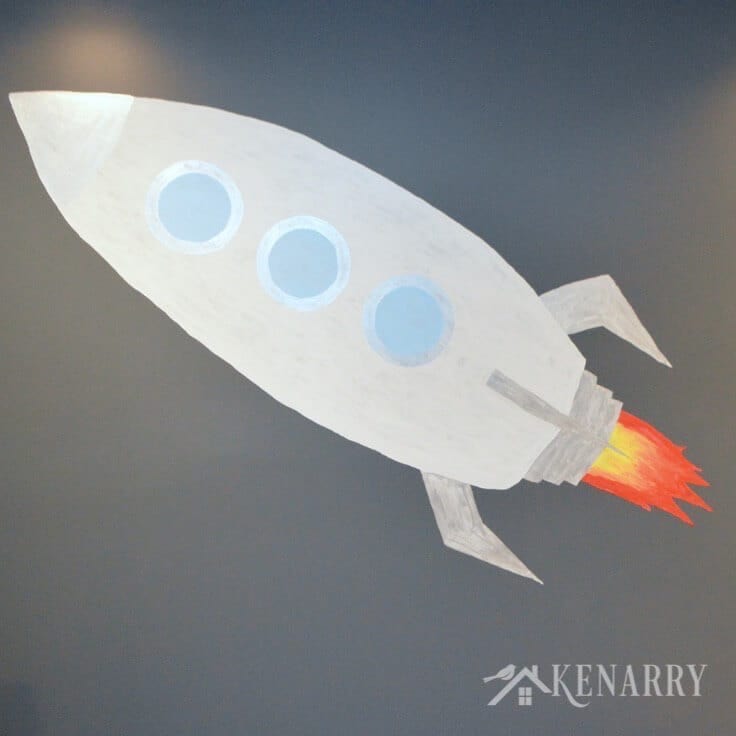 For the base of the rocket, I combined DecoArt’s Cotton Ball Americana Multi-Surface Satin Paint with some of their Americana Multi-Surface Metallic Silver paint in a small plastic container to give it a little sheen. In hindsight, I probably should have applied a second coat of primer to the rocket before I started painting the base. I ended up needing to give the rocket at least three coats of the white/silver paint blend before it was as solid and opaque as I wanted. I also painted several coats of metallic silver on the nose cone, around the windows, the fins and the thruster. 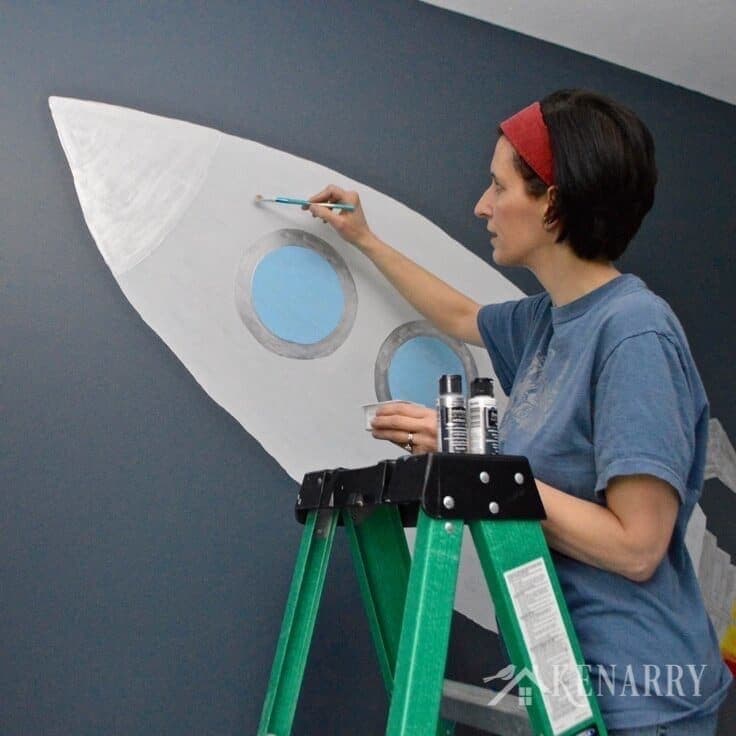 For the flames coming off the thruster of the rocket, I used a similar blending technique like I used on the planets. I painted the outer part of the flame lipstick red. I painted the inner part of the flame canary yellow. Then working quickly I blended the red and yellow paints together using a paint brush and a small cotton rag to create the orange and give it a fire-y appearance. 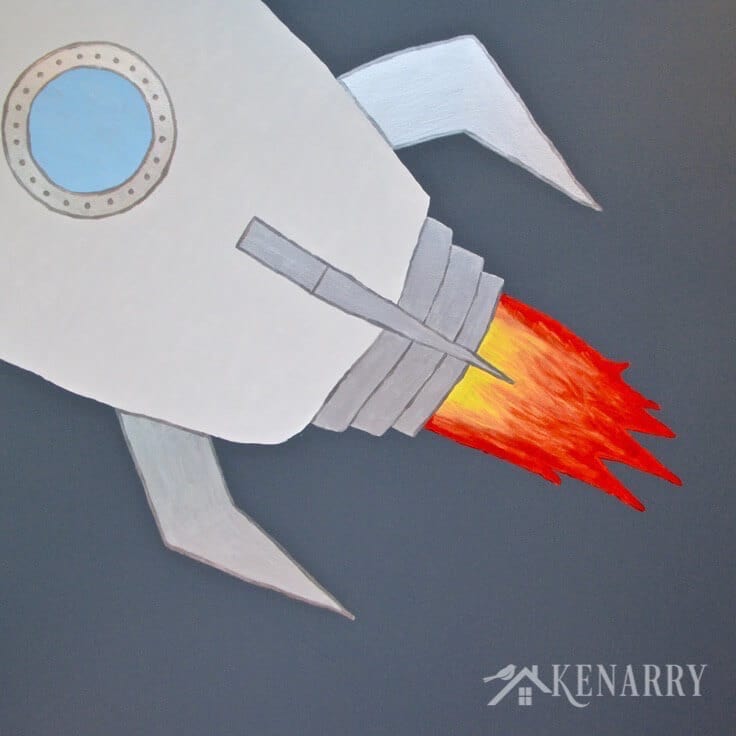 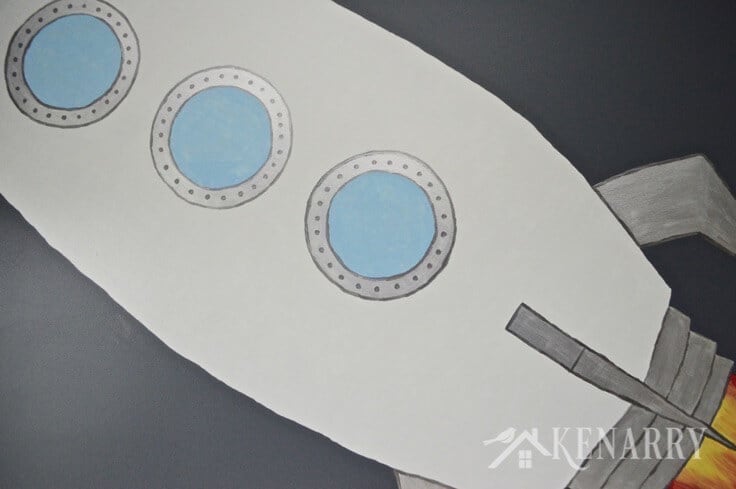 7. Step back and enjoy the outer space mural. While the oversized rocket really steals the show when it comes to this outer space mural, I must say I’m pleased with how the whole thing turned out. 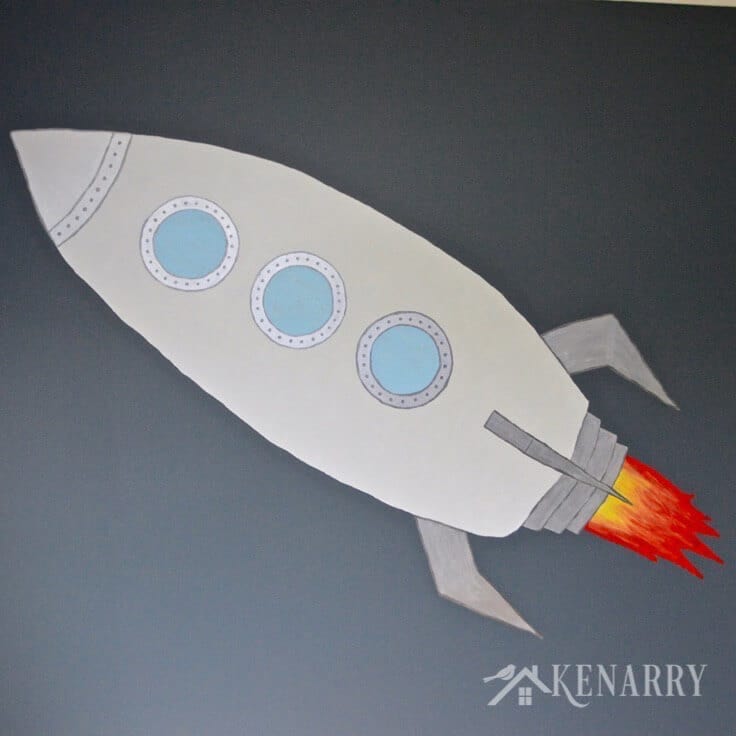 There are five planets on the wall across from the rocketship. Not that it matters, but if anyone ever asks from left to right, these are my artistic interpretations of Mercury, Neptune, Venus, Saturn and Jupiter. 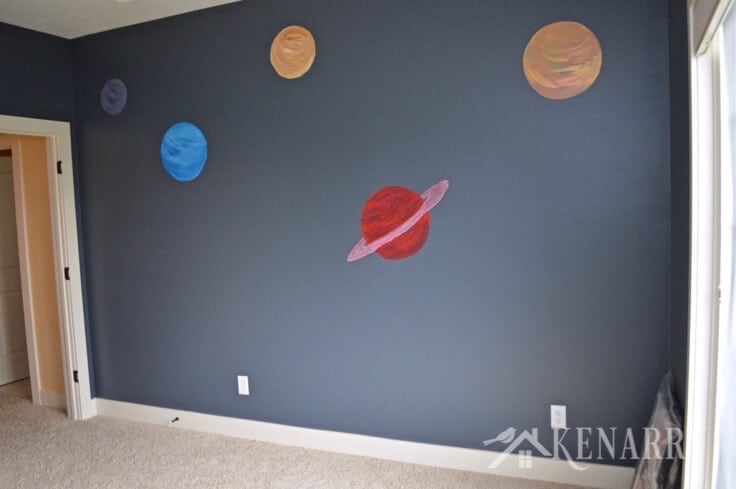 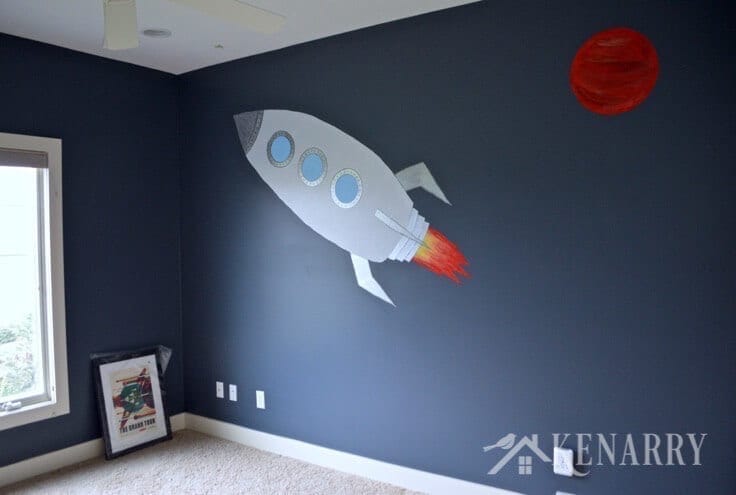 The last two planets are on the wall above the closet and bedroom doors. The little copper colored one is Pluto and the green one is Uranus. 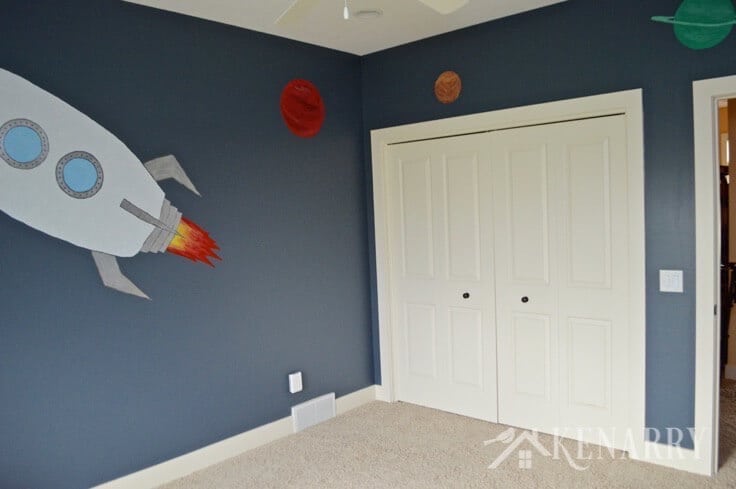 If you liked this outer space mural tutorial, please share it with your friends or pin it for later:

While you’re here, be sure to check out these other Ideas for the Home by Kenarry® –